Serj Tankian: "What's important to us is the fact that genocide still occurs today" 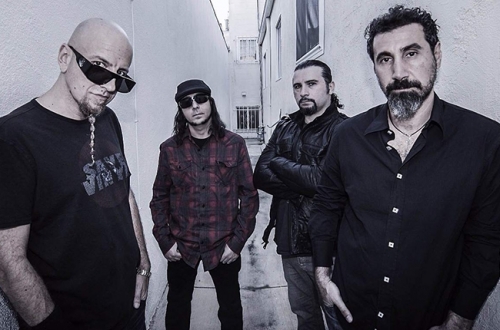 "We do want to get together after the tour to talk about writing, but who knows," SOAD drummer John Dolmayan told Billboard during a conference call to discuss the group's upcoming Wake Up the Souls tour, commemorating the 100th anniversary of the Armenian Genocide during World War I.

The tour, of course, is taking priority for the quartet. An outgrowth of its Souls concerts dedicated to raising awareness about the genocide, the trek begins April 6 at the Forum in Inglewood, Calif., and includes 14 dates in Europe and North and South America, with stops at the Rock in Rio festival Sept. 24 in Brazil and on April 23, the day before the annual worldwide observation of the genocide, in Yerevan for SOAD's first-ever performance in Armenia itself.

"As the date gets closer and closer where we're gonna embark on this tour, I'm getting more and more excited about it," Dolmayan said. "That tends to happen for most tours, but for this one especially, since it's culminating in Armenia. It's even more impactful for me as an Armenian and as a musician. It's something that transcends music. This is more important than the next System of a Down album. This is something that's far-reaching and it's actually bigger than the Armenian genocide itself. This is a world issue."

SOAD frontman Serj Tankian added, "What's important to us is the fact that genocide still occurs today. There is no international, executable agreement irrespective of the Genocide Convention and many ad hoc committees around the world. There's nothing that all nations have signed that says when a genocide is occurring, all bets are off. ... It's important to us to not just raise awareness, but to help bring justice to this cause."

Tankian, who's played Armenia on his own tours, said there's no particular reason the band, which formed in 1994 and took a hiatus between 2006 and 2010, hasn't played there until now. "I think the logistics to put something like this in place in Armenia is a very difficult process, and it's taken a long time to get that together," he explained.

He added that SOAD also hoped to play Turkey, where 1.5 million Armenians were killed by the Ottoman Empire, but that permissions were too late to make the proposed date happen. Dolmayan stressed that over the years SOAD has "done the best we can to not become preachy in our message" but promised that there would be no question about the purpose of the Wake Up the Souls tour. "This touris about the Armenian Genocide," he said. "You don't want to get too preachy. You want to provide information, but you don't want to push it down people's throats. So we will have some information available and we have some video presentations we put together that will be taking place during the show. ... We've been very fortunate in that we're in a position we can entertain people and also give them information at the same time, if they're open to it."

Tankian and Dolmayan were joined on the call by Armenian National Committee of America Executive Director Aram Hamparian, Turkish scholar Taner Ackam and Rep. Adam Schiff (D-Calif.). Schiff promised renewed efforts to push approval for the Armenian Genocide Truth and Justice Resolution, which calls on Turkey to end its denial of the genocide. He's also calling for a "high-level delegation" to visit Yerevan for the April 24 commemoration.