Sirusho speaks about her image and appearance - INTERVIEW 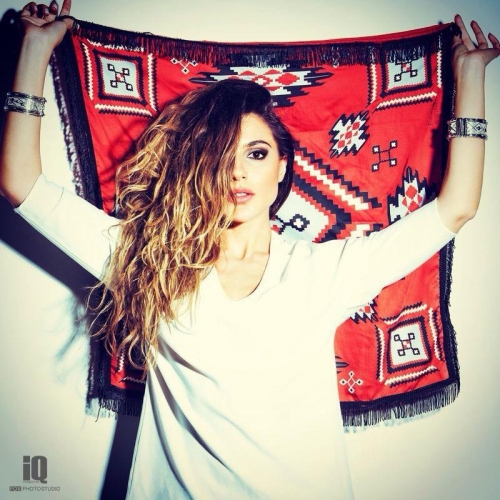 YEREVAN. – Renowned Armenian singer Sirusho’s song entitled “PreGomesh” was a breath of fresh air in the Armenian show business. It compelled the Armenians to make a retrospect to their origins, former images, and their history. NEWS.am STYLE spoke with the talented singer about her style, appearance, and images.

Your clothes are always stylish and your look is marvelous. Are you consulting with any stylist, or do you dress according to your taste?

Thank you. I decide how to dress. I also am the person behind my video clips and concert outfits.

Are accessories important in your life?

I love accessories; I use them both in everyday life and on stage. I am very happy that we produced “PreGomesh” accessories—several samples of silver—, which already are in [Armenian capital city Yerevan] stores. All decorations have their meaning.

All items the Armenian women have used have had a meaning, and we tried to restore this with the best specialists in the city. We prepared thumb rings (according to Artsrun Berberyan and Lusik Aguletsi), which were widely used before but are forgotten today. For example, the square and the circle symbolize unity. The triangle—the acute angle below—is the symbol of the woman. The belt means protection of man. The central coin of the head decoration with coins is with the image of [Armenian former emperor] Tigranes the Great. And there is a large dove (“nshik”) on the bracelet, which [that is, the dove] was one of the most common details of ancient Armenian decorations, and so on. I am glad that it received such huge response from the very first day.

Whose advice do you base yourself on when selecting clothes?

When I started working on the clothes for the video of “PreGomesh,” I had put an important task before me: To show that national costumes can “walk” [along] with modern fashion. The Armenian girls are getting prettier every day, [and] they wish to be close to global tendencies. My wish was that, despite being consistent with international fashion, they be original and unique, have their words and say in today’s fashion. In my view, this can best be done by making use of the elements of national costumes, which [i.e., the elements] were gradually being forgotten. My work was not in vain because I began noticing, after “PreGomesh,” a greater attention toward [Armenian] national decorations and trimmings.

The attitude toward Armenian clothing and jewelry was different just a few months ago. It primarily captured the attention of the [Armenian] diaspora, and it seemed almost improbable to see Armenian details on young modern Armenian girls. Now, however, the picture has definitely changed. It does not matter whether or not this will happen because of the “PreGomesh” accessories; the important thing is what happened after this video; the materialization of a great wish. Now, Armenian-like jewelry and clothes can easily be called a trend in Armenia. I recently noticed that fabrics with Armenian motifs are placed on the showcases of stores hat sell fabrics, and this attests to the demand. These stores operate for a long time and I had not noticed anything like that. Now, I am working with silversmiths who say the attention toward silver has grown. Armenian details can be noticed on people either in everyday life or during events or on stage; this is an accomplishment. This perhaps is one of my greatest achievements as a person, as an Armenian, and as an artist, alike.

Can you leave the house without makeup?

I very often go out without makeup, or even with makeup [but] with [a] very leisurely and light [makeup], [with] solely one or two items; I like it that way.

And what do you underscore the most in a woman’s appearance?

[Her] nature. For me, a woman that has a repulsive spirit and inner world can never be beautiful, regardless of her external figures, and I am becoming more convinced of this. Big lips, a small nose…these criteria are not for me. I like it when nature is not lost in human kind and it remains original.

When you write or perform a new song how is Sirusho’s image, which will perform that song, born? I mean the appearance.

The images in my songs are varied. The song “Havatum Em” [“I Believe”] is the contemplations of a mature girl, a woman. The songs “Erotas” and “I Like It” are about a much more cheerful girl who can rejoice selflessly. “PreGomesh” is the image of a strong, disobedient person, whether a woman or a man. All these are people that are very different from one other and perhaps also conflicting, but all those kinds are within me and they are expressed in my songs.