David Mushegain to Israel: I can’t get my head around how a nation of surivors of the Holocaust can find it acceptable to side with Turkey as they attempt to complete the Genocide of the Armenians 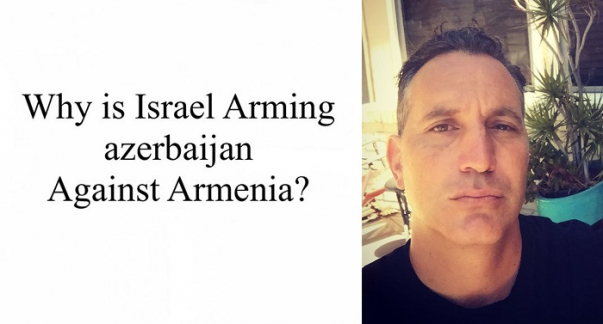 Armenian-American renowned photographer David Mushegain calls the Israeli government to stop supply Azerbaijan with weapons. The photographer finds it shameful that the nation who has suffered Holocaust joins Turkey and Azerbaijan helping them to continue Armenian Genocide.

“ISRAEL I PRAY YOU STOP SELLING ARMS TO DICTATORS WHOSE SOLE PURPOSE IS TO KILL ARMENIANS AND CONTINUE THE GENOCIDE. OUR COUNTRIES SHARE A SIMILAR TRAGIC HISTORY. WE ARE YOUR BROTHERS AND SISTERS. I had to think for a long time before posting this as I have so many dear friends who are Jewish and Israeli and I did not want to come off as offensive but people need to be aware of what is happening . To be clear this is directed at the government of Israel in specific regards to their decision to arm and resupply azerbaijan. I cant get my head around how a nation of surivors of the Holocaust can find it acceptable to side with turkey as they attempt to complete the Genocide of the Armenians. I personally think they should be ashamed”, writes Mushegain on Instagram.

He also cited the interview with Israeli journalist Yossi Melman by Simon Spungin on Haaretz.com. “It’s very cynical that turkey and Israel are both fighting against Christian Armenians. Not to mention that the Armenian Genocide which Israel, the homeland of Jews who perished in the holocaust, holocaust survivors, Israel refuses to recognize the Armenian Genocide. It’s cynical there is no other word to express”....”originally it was not to anger turkey thats why we refused for decades to recognize the Genocide” ... “but now we are no longer friends with turkey and yet for same reason because turkey and Israel are now helping azerbaijan we dont want to annoy on one hand turkey and on the other hand the azeris”...”its really really as a Jew, as a Israeli, i cant accept it”....”Israel should have insterted at least a grain of moral values in their foreign policies”....”Israel is just interested in selling weapon weapon weapons and nothing else...”, says the article.