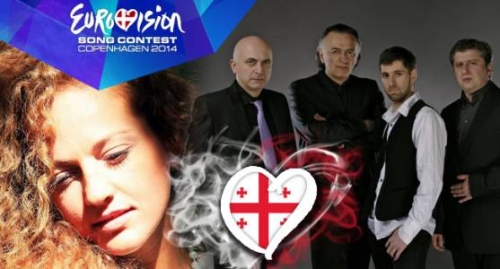 
Fusion jazz band The Shin, along with singer Mariko Ebralidze, will represent Georgia at the Eurovision 2014 Song Contest, which will be held in the Danish capital city Copenhagen, with their song “Three Minutes To Earth.”  The Shin was formed in the late 1990s and comprises five musicians. Ebralidze joined the band as a singer.  Georgia will compete in Eurovision’s second semifinal, which will be held on May 8. In an interview with NEWS.am STYLE, The Shin members and Mariko Ebralidze spoke about their expectations from the song contest, and famous Armenian showman, comedian, and singer Aram MP3 (Aram Sargsyan), who will represent Armenia at Eurovision 2014.

What will Eurovision change in you career?

The Shin: It’s our real challenge. We do music already years and now it’s time to spread this genre to Europe so Eurovision must be very beneficial for us.

Mariko: It will absolutely change my career and not only. It will change my life, my road.  This is the biggest chance to introduce yourself.  That’s why I think it’ll work so well for my career.

What are your expectations from the Copenhagen show?

The Shin: We expect big applause from people. We’re going to use all our energy to shine the stage and get same energetic support from audience.

Mariko: I expect to meet new people and get positive emotions.  I’m going to do my best and this demands lot of strength. But I definitely have this strength. I’m sure people will appreciate it. I expect big experience which will be unforgettable for me.

What are your favorite Eurovision songs from previous years?

The Shin:  We both love ABBA’s “Waterloo”. We think it’s still the best song ever in contest.

Mariko: I like Loreen’s “Euphoria” and “Molitva” by Marija Serifovic. I also have to mention Armenian “Qele Qele” which was very catchy sung by beautiful artist.

Have you heard the Armenian entry? What do you think of it?

The Shin: We like Aram mp3 so much. He’s very good singer as it seems and the song has definitely great arrangement. All the best to our friend in Copenhagen.

Mariko: I met Aram in Amsterdam. I think he is wonderful person and artist. The song is very melodic and nice to listen. I wish really, really good luck to him and the whole brother Armenia in Eurovision.