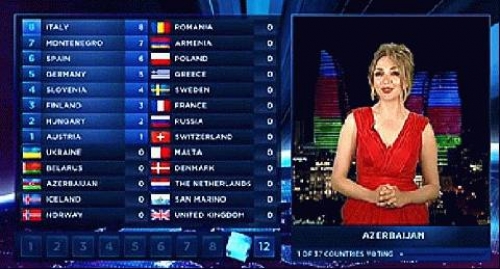 
The Eurovision 2014 Song Contest Grand Final was held on May 10 in the Danish capital city of Copenhagen. Famous Armenian showman, comedian, and singer Aram MP3 (Aram Sargsyan), who represented Armenia at the event, and with his song “Not Alone,” placed fourth amassing 174 points.

Bearded cross dresser Conchita Wurst, who represented Austria, became the winner of Eurovision 2014. The Azerbaijani broadcasters, however, again surprised everyone with their “distinctiveness.” This time at the Grand Final dress rehearsal, the Azerbaijani female presenter announced that their 10 points went to Ireland, in the case when Ireland had not made it to the final.

When the Danish presenters corrected the mistake and asked to once again announce who the 10 points went to, the Azerbaijani presenter again said Ireland without hesitation.