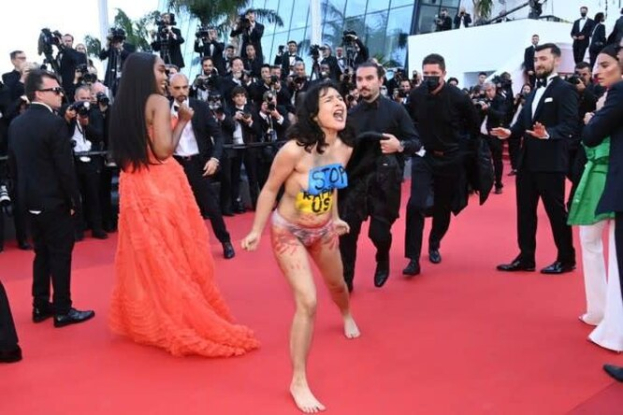 
An unusual incident happened at the Cannes Film Festival, a naked woman ran out onto the red carpet.

An activist jumped out on the red carpet before the premiere of "Three Thousand Years of Longing" by George Miller, starring Tilda Swinton and Idris Elba. The woman appeared in front of photographers with bare breasts painted in the colors of the Ukrainian flag, as well as in underwear stained with red paint.

The activist suddenly tore off her clothes and knelt down with loud shouts. The incident frightened many stars - they rushed to leave the red carpet.

The protester did not stop screaming when the security guards tried to pull her off the carpet. Eventually, the woman was covered by her coat and forced to leave.

The next day in Cannes, were to be events in support of the affected film industry in Ukraine. However, some tabloids report that the naked woman who ran out actually wanted to take advantage of the situation to claim her own French organization.