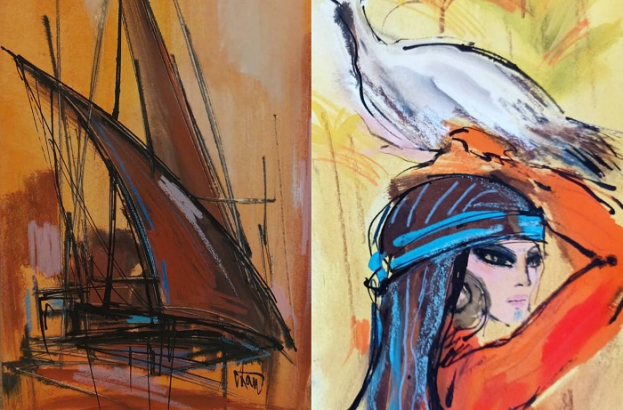 For many in the art world, Egyptian Armenian artist Chant Avedissian is known for his nostalgic stencil paintings of Egypt’s Golden Age. In 2013, his series Icons of the Nile (1991-2010) set a record for the highest price for a piece by a living contemporary Arab artist when it sold for more than $1.5 million at Sotheby’s Doha. Avedissian died in Cairo in 2018.

The National has published an extensive article about this Egyptian Armenian artist.

And the Mikaelian family shared their memories of the late artist and his works, which they have acquired for decades and which are now the subject of the exhibition Chant Egyptien, on view at ArtTalks in Cairo.

But four brothers from Downtown Cairo remember Chant Avedissian as a neighbor, a childhood friend, and the artistic protégé of the city’s culturally active Armenian community. Their father, George Mikaelian, a bookshop owner and arts patron, supported Avedissian’s work throughout his career in Egypt. “I kept asking my father, 'What are we going to do with all these paintings?'” says Hratch Mikaelian, the eldest of the brothers. “He just said: 'You will see, you will see.'”

The exhibition Chant Egyptien shows how Avedissian experimented prolifically with a variety of styles and mediums. “Every one of Chant’s exhibitions had its own subject and style; he developed his styles a lot,” says Chris Mikaelian, Hratch’s younger brother who took art lessons at the same studio as Avedissian.

Armenian folkloric dance traditions, the lives of rural Egyptian women, Islamic arts and Egypt’s ancient heritage were among the subjects that the artist captured in painting, photography and costume design.

Chant Avedissian, the son of Armenian refugees, was born in Cairo in 1951.

In 1970, Avedissian travelled to Canada to pursue his studies at the School of Art and Design in Montreal.

Then, after a brief return to Egypt, he moved to Paris in the late 1970s to attend the National Higher School of Decorative Arts.