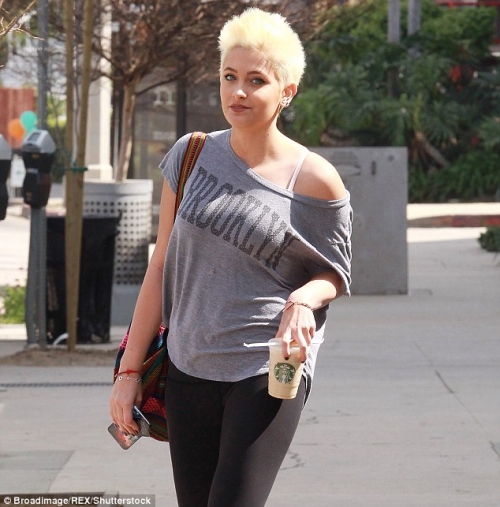 Paris Jackson defended Kanye West after a Michael Jackson fan lamented the rapper surpassing the King Of Pop's tally for the most Top 40 hits.

The 18-year-old responded on Monday to an Instagram comment on her page from a Jacko fan who was 'f***ing mad' about the Kanye milestone, saying her father 'liked' the rapper.

The comment came after Kanye, 39, earlier this month scored his 40th song to reach the Top 40, with his featured performance on ScHoolboy Q's new single That Part. 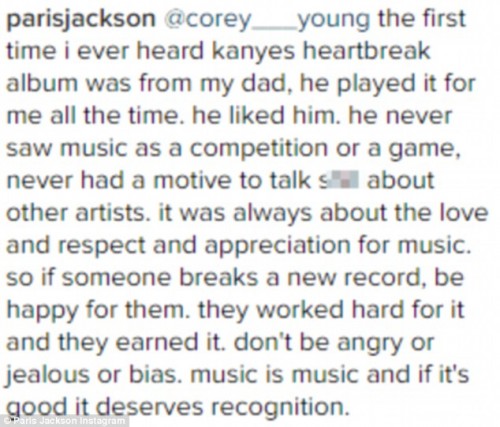 Kanye had been tied with Michael and Frankie Valli with 39 hits in the Top 40.

'The first time I ever heard Kanye's Heartbreak album was from my dad, he played it for me all the time. He liked him,' Paris wrote, referencing West's 2008 album 808s & Heartbreak.

'He never saw music as a competition or a game, never had a motive to talk s*** about other artist.

'It was always about the love and respect and appreciation for music.

'So if someone breaks a new record, be happy for them. They worked hard for it and they earned it. Don’t be angry or jealous or bias. Music is music and if it’s good it deserves recognition,' Paris added.

With his latest album, Kanye cracked the top 10 list of the male artists who have racked up the most top 40.