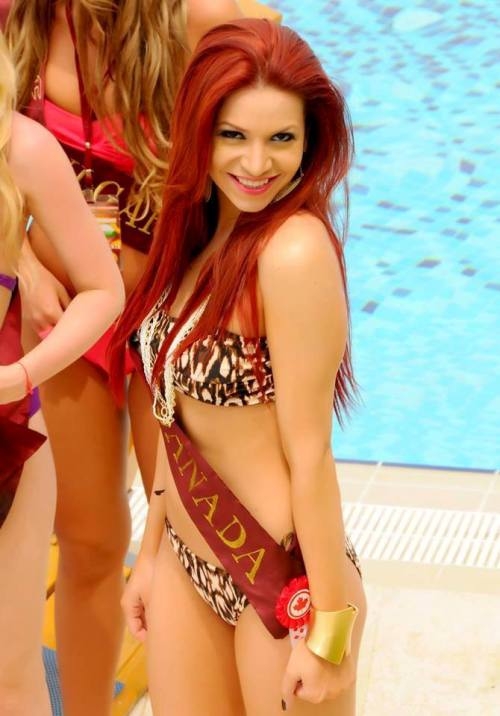 Inessa Tadevosyan has recently won the Miss Talent title at international beauty contest. As the model represented Canada at the contest the NEWS.am Style decided to reveal why Tadevosyan did not stand for Armenia.

Inessa, please tell us about your modeling career.

Everything started when I was 12 and appeared at a modeling agency, which established a group for children, where we were taught about the modeling business and techniques.

For the first time I was modeling at a fashion show when I was 13, after which I continued my career at Atex fashion house. In 2001 I was selected in Top 12 of Miss Student beauty contest, and in 2003 obtained my first crown as First Vice-Miss of Miss Tattoo Art Club contest.

You had success in international contests as well…

In 2005 I won Miss Caucasus contest, after which I was invited to participate in CUBE TV show. After a two-year-long TV career I achieved Vice-Miss of Miss Russian Bikini contest in 2007 and started my international modeling career. In 2008 I received a third place in Miss Globe International contest, as well as Miss Bikini 2008, Miss Disco Queen 2008, and Miss Talent 2008 titles.

In Las Vegas I represented Armenia at Miss Hawaiian Tropic International 2008 contest, where I got Best Body title. In 2010 I became Best in Swimwear of Miss Intercontinental contest.

In 2012 I participated in Miss Universe Canada, already as a Canadian citizen, where again I was in the Top 12. Eventually in 2013 I became Miss Talent at Miss 7 Continents beauty contest, which was hold in Turkey.

How did you move from Yerevan to Canada?

For the last six years I am the face of Canadian GWT Corporation, which produces jewelry. I have my dance school, Dance Mania By Inessa, and I live in Canada since 2006. Unfortunately I had to drop my university prior to moving to Canada, and I had to start everything over.

Isn’t it hard to participate in the contests and not to represent Armenia, as it was in Turkey recently?

Of course, it is. Even at the rehearsals I always run to the scene when I heard Armenia. Everybody laughed. It was also unusual to be at the stage in Native American dress instead of Armenian national dress.

Do models have secrets?

Those are usually not secrets but rather experience. As for my appearance, I maintain good form, since I dance 6-8 hours a day. I never keep diet.

How did you get Walsh surname?

Walsh is a screen name and is primarily for foreigners, who usually pronounce my real surname with troubles.

What would you recommend Armenian girls?

I want to say all those, who are or want to be in modeling business, that the goals are achievable if you really have a big desire to achieve them. Don’t forget that stage is just a stage, and it is more important to come down from the stage with the head held high, without losing our human features, as at the end of day all of us stand in front of the mirror.

last news on "Designers and models"