I wanted to make sure I represent Armenian tolma in the best way possible: Louisa Sharamatyan-the Armenian participant of The Worst Cooks in America 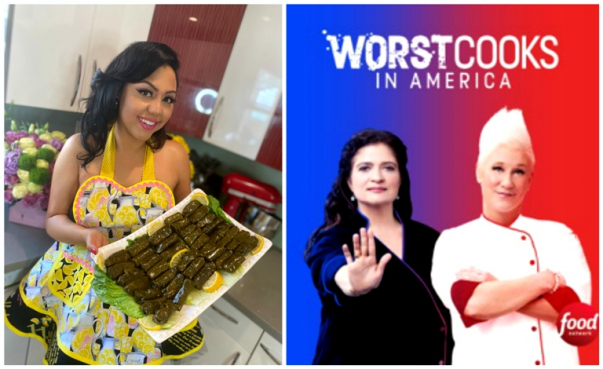 Armenian-American TV personality Louisa Sharamatyan is now participating in Food Network's famous The Worst Cooks in America TV show. Louisa, who is also known for her participation in the Worst Bakers in America, confesses that the most responsible episode for her was cooking Armenian tolma, because she knows how important this traditional food is for Armenian culture. In her interview with NEWS.am STYLE the Food Network star also talks on her Armenian roots, favorite dishes and expectations from the show.

Louisa, how did you decide to take part in The Worst Cooks in America? Did you really want to improve your cooking skills, or just wanted to be a part of the famous TV show?

I was previously on Worst Bakers in America last year, so the network was already familiar with my “skills” in the kitchen. When the opportunity came up for Worst Cooks in America, I was very excited. For me it was more about improving my skills in the kitchen and making my mom proud. I wanted to make a strong comeback and prove, that I can succeed in the kitchen. I am so grateful for the opportunities the Food Network has given me. They truly embraced and welcomed my love for the Armenian food and culture. Strong comeback after Worst Bakers in America and this was my chance.

How often were you spending your time on cooking before participating in the show, and has something changed now?

Before the show I would shadow my mom in the kitchen but not fully prepare meals by myself. I think my mom is so used to cooking everything for me. That is very common if you live in an Armenian household (laughs). A lot has changed now, this show has opened up a new world of cooking for me. I cook at least once a week now. I am much more confident in the kitchen. Now, I feel so satisfied and responsible after I make dinner from start to finish. I am currently practicing the art of chopping an onion. I really want to make Chef Alex Guarnaschelli proud. She inspires me so much!

As you have mentioned, you've also taken part in Worst Bakers in America. What can you say about your experience?

Yes, you are correct. Last year, I had the honor of joining the cast of Worst Bakers in America, Season 2. It was a pleasure to meet and work with world-renowned bakers like Chef Lorraine Pascale and Chef Jason Smith. The experience was incredible and eye-opening. I was drastically out of my comfort zone. Baking is hard and leaves no room for mistakes. If you miss one step and rush, you have to start all over again. I was eliminated very early on. I mixed in baking soda instead of baking powder and my cake was ruined. I enjoy cooking much more than baking. Keeping track of measurements for someone like me, who doesn’t bake is difficult. Also, some deserts require stuffing and glazing which is a whole different level of difficulty including food thermometers. That’s not to say that I’ll just give up on baking. I sometimes experiment in the kitchen and teach myself while watching youtube videos. I’ve also purchased a variety of cookbooks...two of them are by my mentor, Chef Alex Guarnaschelli... Old-School Comfort Food and The Home Cook. She is also releasing a new cookbook in October called, ”Cook with me: 150 Recipes For The Home Cook”.

Returning to The Worst Cooks in America, let's remember the first episode of the show, when you made Armenian dolma. Was it your first time cooking it?

At home, I usually film my mom rolling the grape leaves. My followers love to see what my mom is making in the kitchen. I love to document how she cooks and bakes. It was definitely my first time making tolma alone with no assistance from anyone. I was very nervous. As you know, being Armenian yourself, food plays a big part in our cultural and heritage. I wanted to make sure I represent Armenian tolma in the best way possible. I was proud about the presentation of the tolma, but not the taste. I ran out of time and the stuffing was undercooked. After the show, my tolma cooking skills have gotten so much better. I enjoy all the steps of preparation now. I taste my food as I go, and I am much more relaxed in the kitchen. I also experiment a lot with stuffed bell peppers and tomatoes.

What's your favorite Armenian dish, besides tolma, which you would like to cook for the TV viewers?

I have so many favorites. There are several dishes I would love the non-Armenian viewers to experience. I would love to make traditional Armenian barbeque (khorovats) with shish kabobs and traditional skewers on the grill. It would be nice for the viewers to see how we marinate before grilling. Also, we have so much range when it comes to be Armenian BBQ... lamb, pork, beef, chicken, veal, etc. That would be a wonderful experience. Throughout history, Armenian cuisine has fallen under the Middle Eastern cuisine umbrella. We share similar dishes with the Persians, Arabs, and Greeks counterparts. My family and I love lahmajun, hummus, tabbouleh Cheekfuta as well.

What's the most important thing/skill, you've learnt during this show?

I learned so many things, it’s hard to just say one. Chef Alex always says “Clean as you go”, and that was difficult to do at first. I then realized how important it is to be clean and organized while cooking and not just after when you actually clean and throw away the trash. She also told me not to overthink so much while cooking and to just do it and some dishes are meant to look messy and full of life. Seasoning, Seasoning, Seasoning! Never underestimate the power of salt. I also learned the power of “Mise en place” which is basically preparing and gathering all the ingredients, utensils needed for your dish.

Louisa, what cooking show will be the next? Do you think one day to appear at Master Chef?

Wow, it would be an honor to appear on Master Chef. For now, I am working on perfecting my cooking skills. I am excited to see what the future holds.

How do you estimate your chances of winning the competition?

To be honest, each episode that I was not eliminated was very surprising for me. I had NO idea I had it in me to cook and focus like that. You have to wait and see....

Louisa. I would like also to speak about your Armenian roots…

I was born here in America, specifically in Los Angeles. I live in Glendale, where there is a very large Armenian community. I have been raised with traditional Armenian values and my parents tried to preserve the Armenian culture as much as they can. My parents made sure I know how to read and write in Armenian. My parents are proud owners of a child daycare called “Hayastan Daycare” and my whole life I have been surrounded by the love for Armenian culture. They also used to run an Armenian Saturday day school, which I would attend. I love Armenian literature and cinema. My grandmother and I read literature by Paruyr Sevak, Silva Kaputikian, William Saroyan, Hovhannes Shiraz, and more. It’s important for me not to forget how to read and write in Armenian. We are such a talented and creative race.

Do you come to Armenia frequently?

Unfortunately, I do not, The last time I visited Armenian was in 2005. I am planning on visiting very soon.