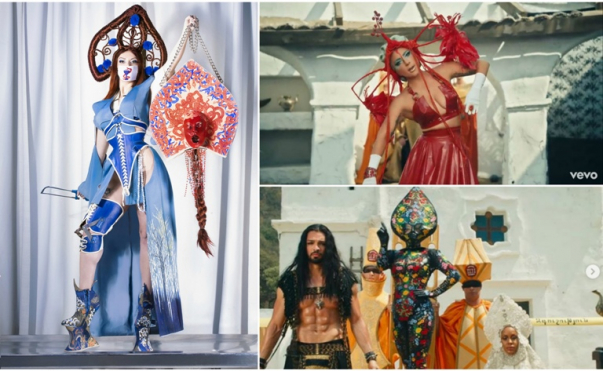 Lady Gaga's music video «911» directed by Tarsem Singh and inspired by Armenian film director and artist Sergei Parajanov has become one of the main topics for Armenian fans, who have appreciated not only the singer's emotional song and artistic play, but also the fact, that the world known artist featured Armenian culture on her music video. Moreover, some of the looks seen in the music video were designed and created by Armenian-American designer Marianna Harutunian (The King's head peace) and Russian-Armenian London based artist Karina Akopyan (The Floral Alien and the red bra look).

NEWS.am STYLE has had an interesting interview with Karina Akopyan, who told us how she has created the looks and what impact did Parajanov have on her works.

Karina, congratulations on your collaboration with Lady Gaga for her new music video 911! Was this the first time you were working on her costumes, and how does it feel?

It feels completely surreal. It was first time we worked together, but hopefully not the last.

How did you get the offer for this collaboration?

I was approached by Nicola Formichetti team, as one of his stylists was following my work on Instagram. When I was approached for the project I was told that style of the video has strong connections to my own artistic style and therefore they wanted to feature them. At that point I didn't know it had any Parajanov references.

And how long did it take you to make the costumes?

From research to finished costume it took about a month. I usually carry around idea for a little while before starting it, so I probably had an idea for it couple of months before I actually started.

Were that peaces initially created for the music video or have you made them earlier for your collection?

The costumes featured were created in 2017. As with most of my costume designs they were first created for my own shoots and art projects. I started as painter over 10 years ago, but later a costume element found a way into my work as I got an urge to bring my characters from paper to reality. I certainly don't consider them fashion garments, but art pieces. They are very uncomfortable, restricting, some of them you can’t see or walk in properly, and the costume Lady Gaga worn is one of those. She is very experienced with extreme looks, so I am sure it wasn't very difficult for her. There were actually few full costumes of mine, that could have been in the video, but it was “Floral Alien” that made it in as a complete look.

The costume is made of leather that’s laced all the way through with floral appliqué and has painted elements. The headpiece is pointed shape inspired by the shape of  Kokoshnik. There are a few cultures with a similar decorative pattern, but that one that inspired me was on a black khokhloma spoon. With my work I play on contrasts, such as beauty and ugliness, femininity and aggression, ancient and modern, history and tales. Taking the look in the darker direction I linked it to black leather creating a character that is potentially alien shaped with long head and legs emphasized by heelless shoes. After all that the character got a nickname- “Floral Alien”. I would also say it figuratively represents death itself, like a body, that decomposes on the ground, that grows flowers out of it, eventually starting a new cycle of life.

The costumes are one of the main success of the video. What comments do you get from Gaga’s fans?

All the reactions have been very positive. It’s been overwhelming to receive so much support and also suddenly from so many Armenian people. I am used to both- positive and negative comments, as my work can be quite provocative, but this has been lovely.

I came across Parajanov’s work as a teenager while studying art already in UK. His work mesmerized me completely, the only other director to leave such impact on me was Tarkovsky, but Parajanov’s use of colour was much closer to my heart. Red is my favourite colour. The colour of pomegranate, the colour of blood. It’s passion, it’s pain and it’s powerful. It’s a colour, that appears most frequently in my work in both paintings and costumes. Also if I had to pick art movement surrealism is the one I feel closest to, why to have reality, when you can have vivid dreams? Parajanov’s work speaks to subconscious and I hope mine does also.

Your style is very unique and each peace has a story... What inspires you?

I get inspired not just by art, but by London night life, interesting characters I meet, by my own memories, by my childhood, by strange memes I see, it can literally be anything.

Karina, who are your designs created for?

My designs are created for….me! I design them for my own projects. The end product is usually an art print, I often paint on top of it. It’s funny how I started designing costumes, because I wanted to see them come from paintings to real life and then they made a full cycle back on paper.

There are no copies and everything exists as just one sample, I don't usually sell them or advertise them for sale. I wouldn't mind them to go to a good collector or a museum one day, but not really something I would like people to wear out (except me of course). It all depends on a project, every case is unique.

I wouldn't have an issue designing something for somebody else and with this video ‘911’ I was offered to design completely new look, but there just wasn't enough time. I need my time to create and mature ideas, before I can go ahead. I do hope that it can happen for one of Lady Gaga’s another projects. I would also absolutely love to design something for opera, ballet or theatre. I think it would be exciting.

I would like you also to speak about your family, your Armenian roots...If I’m not mistaken you were born in Russia. When did your family move to London?

My parents are both Armenians from Russia, from around Sochi region, I was born in Moscow region and lived there till I was 15. Then I came to UK alone to study and this country became my home, where I could truly be and feel myself.

How did you start to show interest towards fashion?

I was drawing ever since I can remember myself. I was an only child and was very quiet and drawing was my favourite activity. I didn't really need company and liked being by myself. I think I was about 12 when I have decided seriously, that I will go into a creative field. It’s quite difficult to say when I got interested in fashion, I was never interested in actual fashion, but couture and over the top pieces, shows like John Galliano and Alexander McQueen. I was interested in some many things, such as film, fine art and illustration. So, I had hard time choosing, but at the end I found out I don't have to chose! I can do them all, why not?

How much does Armenian culture inspire you and affect on your works?

I was always more around Russian culture while growing up, but there are a lot of references and themes that people from all of around ex-Soviet share and understand. I certainly looked into Armenian fashion history and national costumes and found many exciting elements for future projects. Parajanov’s work made me take more interest in Armenian culture. One of my paintings called “Ararat” featured Armenian cross and a woman in a bondage style costume that in a way has similarities to one featured in 911 music video.

Have you ever been to Armenia?

I am actually pretty embarrassed about this, but I never have. It's not really a great time to travel right now, but as soon as things get a little more back to normal I will come and visit. I was part of the exhibition called Roadmaps in 2018 with an Armenian curator in Yerevan. And it was the photograph of that floral costume Lady Gaga worn in the video that was exhibited there. I would love to do more group shows or to even have a solo exhibition in Armenia with a variety of work including paintings, photography and costume pieces, if opportunity presents itself, it would be an honour.