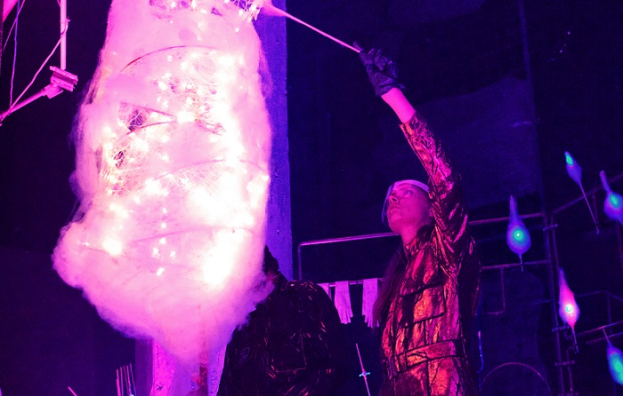 How would you call the state of mind when you are puzzled, intrigued and excited all at the same time?

One thing is certain - never before, and likely never after will I see anything like the performance ‘The Evolution of Stars’ put together by the Instytut B61 - an international ensemble of scientists and artists and brought to Yerevan within the Starmus VI Armenia Festival. 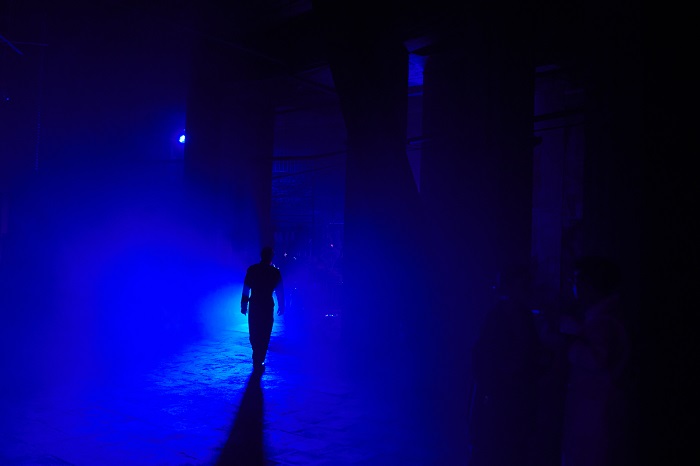 The intrigue started way before the performance itself when lucky participants of this one-of-a-kind immersive show gathered at Republic Square to be taken to a Secret Place in a bus with closed curtains.

The wow effect took us by storm as we entered that mysterious location which turned out to be the basement of the Armenian National Opera and Ballet Theatre. What a superb choice! The basement has been hidden from the public for more than 30 years as if awaiting a special occasion to astonish everyone with its enigmatic architecture and ambience. We were standing there in darkness, totally intrigued, waiting for the story to unveil. The story of how Everything began… 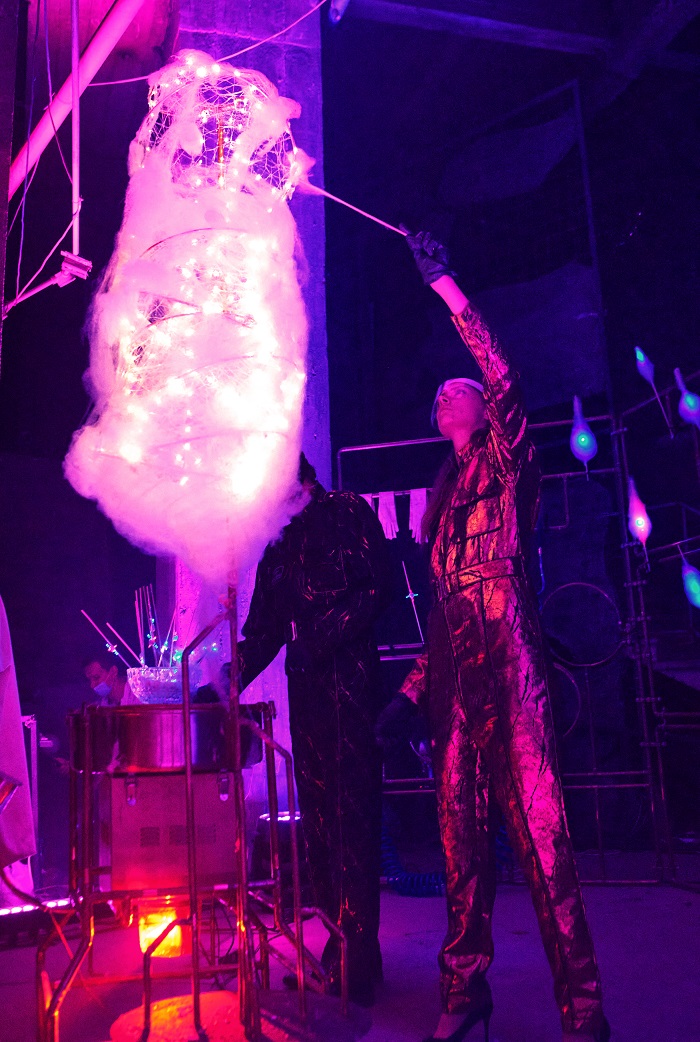 Have you ever gazed into space wondering where we come from, how stars were made, and how the Universe has been created? One of the greatest achievements of mankind is that those questions have been answered by science. “I want set the record straight, - says Jan Świerkowski, the founder of the Instytut B61, astronomer, curator and artist, - we, humans, started in the same place as stars and we are built of the same material”.

Surprised? But you, me, everything we see around us is literally made of the elements born in the stars: iron in our blood, the oxygen we breathe, gold, silver… All the elements were born there – in the vast Cosmos. 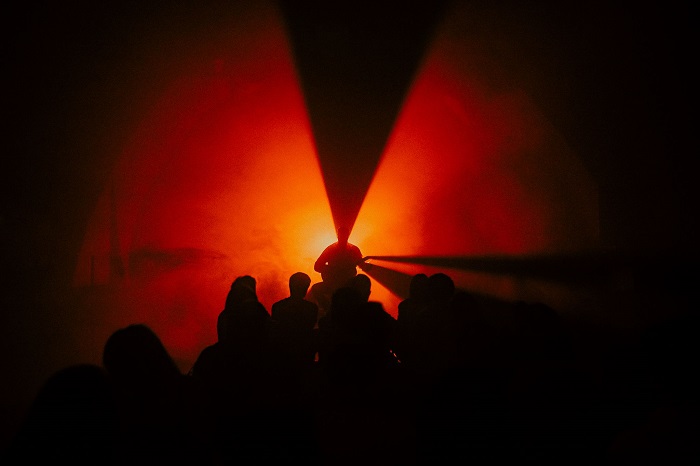 Once you have realised how it all works, you can’t even look at a flower the way you did before. I started to see things differently and I really wanted to talk to people about it. Although not in an educational manner, but in a form of a dialogue. Art to me seemed a natural language for that”. 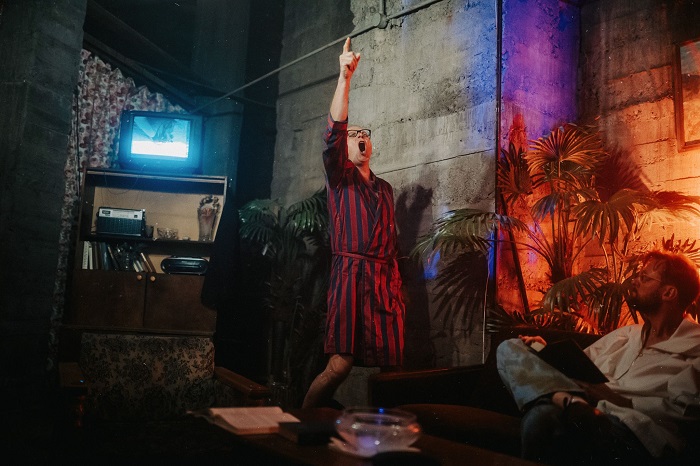 As is apparent from its name, the show takes us through the stages of stellar evolution from the Big Bang to Black Holes. “How is it possible, - I was wondering before the show, - to illustrate a nuclear fusion, or explosions of supernovas through music, dance, light, and performance?

Clearly, the team of the Instytut B61 knows the recipe. ‘Laxmi Bomb’ from India, local and international participants ignite the show. Mariusz Lubomski, a Polish artist with his fascinating voice and magnetic artistry was a real gem! The illustration of Red Giants, beautiful cosmic monsters, accompanied with his vocals was one of the most touching parts of the show. However, Mariusz was brilliant in every other storytelling chapter. 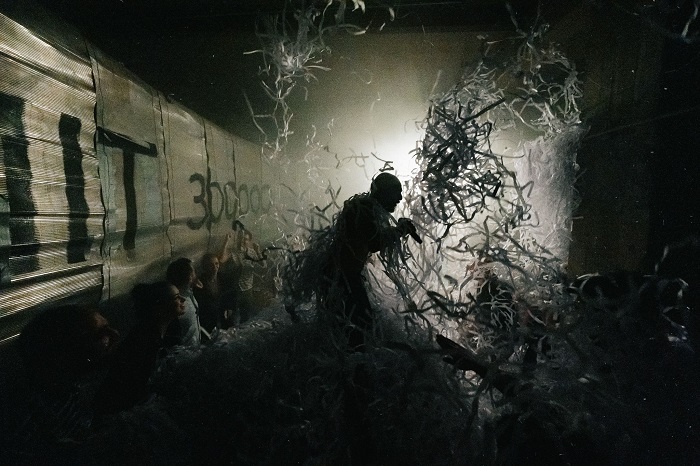 The visualisation of White Dwarfs installation by visual artist Dagmara Pochyla, inspired by Michelangelo’s Pieta struck with its sublime grace – the silent movements of a white figure in the blackness were mesmerizing. This is a picture which will stay with me for a long time.

The end of the show in a massive surrealistic lift also had a lasting effect, a kick of adrenalin flavored with atmosphere of «Solaris». Puzzled and engaged with every atom of our bodies we were like a team of cosmic voyagers who have just discovered the truth behind reality. Isn’t this what science does? It raises the curtain allowing us to see what is happening in the core of our existence. 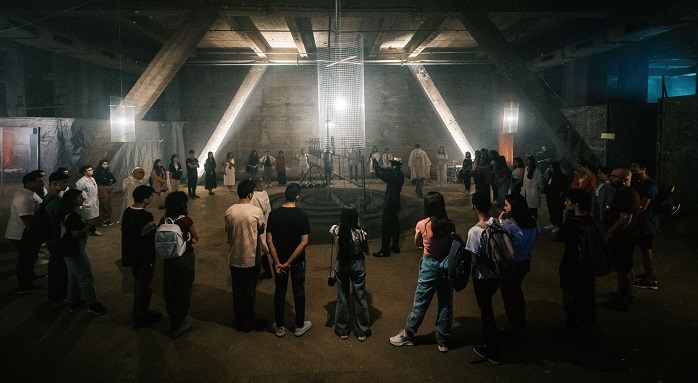 However, I also had a strong sense that the performance tells us something ‘between the lines’, something beyond the laws of physics and cosmology. And so, it did. I asked Jan and Aleksandra Bednarz an actress performing in the show: “What is it that connects us, humans, the most?” “Emotions”, - replied Aleksandra. “Sensitivity”, - responded Jan, - I mean the ability of us to be amazed despite our age, the problems we face, stress, and workload… If we are able to preserve that state of ‘Ah’ within us, we can connect with each other, no matter the culture, or nation. And the Cosmos gives us that consciousness and the greatest meaning.

When we see that we all came from the same point, we can then realise that even if there are differences between us, in the core, we all are the same. That is the whole idea. The Evolution of Stars is a cool performance with music and dance but that is not all that it is. It is there to transmit this philosophical postulate – a very important lesson from astronomy.