Andre on his performance near Azerbaijani consulate in LA and being blocked by Aliyeva on Instagram: We’re now more united 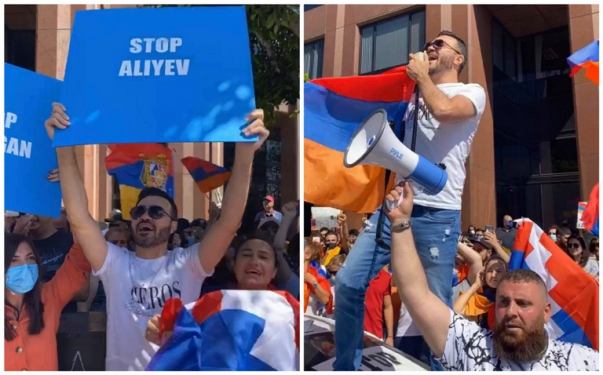 During Armenians' protest in LA against Azerbaijani aggressions on the Armenian-Azerbaijani border and Armenians all over the world, Armenian singer Andre has performed famous song Sari Aghjik in front of Azerbaijani consulate. Heated discussions are taking place over this video not only by Armenians but Azerbaijanis as well, as they continue demanding that the song is of Azerbaijani origin. Andre, who has joint “Sari Aghjik is an Armenian song” propagandas since 2013, says the choice of the song was not by occasion.

“The performance of Sari Aghjik was a good decision for that moment. The Azerbaijani people still continue living with false demands connected with Artsakh and Yerevan. Their statements are very funny because their country has just a 100 years old history and as people say- even Coca Cola is older than Azerbaijan. As for Sari Aghjik, it’s an old Armenian song, that has nothing to the with that non-cultured nation. That is the reason, that I’ve decided to perform that song in front of their consulate in LA, and the fact, that the rest of the Armenians also joined me while singing made the atmosphere more Armenian and touching. I can say for sure that now we are more united like we’ve never been before”, the singer said adding that at that moment he was not an artist but the one who being born in Artsakh has been living with Azerbaijani aggressions throughout his whole life.

“We were there with peaceful protest, while they were screaming all the way in front of their consulate that Artsakh is their land and throwing bottles on peaceful Armenian protestants. Our point is to stop the aggressions on Armenian border and Armenians all over the world”.

Andre is actively protesting on social media and has even been blocked on Instagram by Mehriban Aliyeva.

“I’ve been posting the articles of New York Times, Forbes and Washington Post, which had written about the Azerbaijani threats and violence towards Armenians and was always tagging Aliyev and his wife, so she has blocked me so that I couldn’t tag her anymore. Artsakh is an independent republic and Azerbaijan should admit this fact. Artsakh will never become their territory”.