Julia Zilberquit: I participated in concerts dedicated to Armenian Genocide and Holocaust 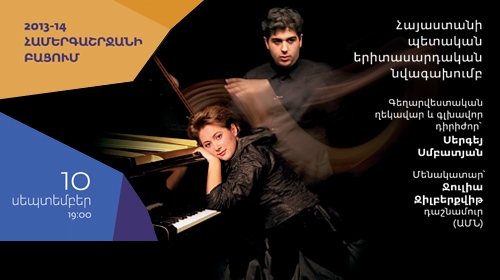 World famous pianist Julia Zilberquit gave a concert in Yerevan on Tuesday and participated in the opening of a new season of State Youth Orchestra of Armenia.

During the press conference in Yerevan, Zilberquit shared her thoughts about renowned Armenian composer Aram Khachaturian and impressions about Armenia.

The famous pianist said she had participated five times in annual concerts dedicated to the Armenian Genocide and Holocaust which are held in New York.

“The concerts are held in a huge Saint John church in New York every fall. It is usually attended by several thousands, including the mayor of New York,” she said.

Julia Zilberquit noted she had performed the works of Aram Khachaturian in the past.

“It is classics. Khachaturian is a part of our repertoire, just as Mozart, Bach and Shostakovich,” she emphasized. “It is my first visit to Yerevan. It is an amazing city, amazing people and wonderful weather,” she added.

In 2008, Ms. Zilberquit premiered Slonimsky’s Jewish Rhapsody for Piano and Orchestra, which was commissioned by and dedicated to her, with Leon Botstein and Jerusalem Symphony Orchestra, in commemoration of the 60th Anniversary of the State of Israel in Jerusalem.