Johnny Depp rocks out with Aerosmith 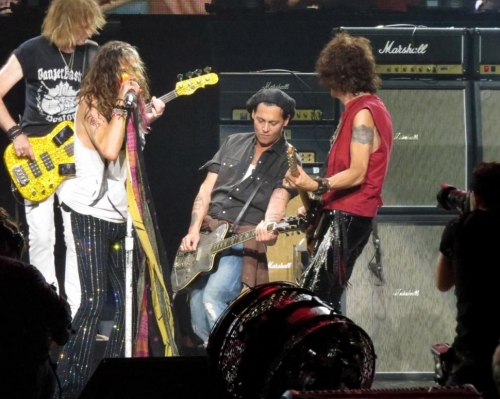 The actor Johnny Depp was a surprise guest at Aerosmith's concert in Mansfield, Massachusetts, on Wednesday night, joining the band on stage for the final number, a cover of the classic tune Train Kept A-Rollin, NYDN reports.

‘Yo! Bringing out on stage my good friend, Mr. Johnny Depp!’ Aerosmith frontman Steven Tyler said when introducing the actor to the crowd. Depp joined the other band members to rock out on the song, and at one point even performed an extended guitar solo.

The movie star was able to hop onstage with Steven Tyler and company because he is currently filming the Whitey Bulger biopic "Black Mass" in and around Boston. But this wasn't his first time jamming with Aerosmith: he played on the studio version of "Train," which was included as an extra track on 2012 album "Music From Another Dimension!" The A-lister also joined the band on the song in concert during a few of their tour dates two years ago.