Sona Oganesyan about her son, their quarantine activities with Misho, her friendship with Tankian and the risky interview with Larry King 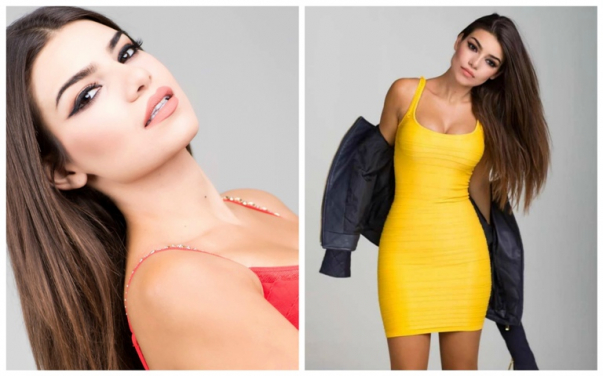 Armenian-American famous TV host/producer Sona Oganesyan and her husband, musical artist Misho have welcomed their baby boy in the beginning of this year, and the young mom says-motherhood is the best gift in her life. Still, Sona hasn’t stopped working. She has recently aired the new episode of her project HyeBrand presenting an interview with world renown musician, Serj Tankian. NEWS.am STYLE has had a rather interesting and exclusive talk with Sona Oganesyan in which she speaks about her son, their quarantine activities with Misho, her friendship with Serj Tankian and risky interview with Larry King.

Sona, the year started for you with a big and blessed change, I mean the birth of your son. What changes did he bring into your life?

It's funny, all my life I thought I wanted to have just one child… But the second he was born, I thought to myself, Wow, I wish I could experience this magic over and over again. All of the clichés are true – there’s no feeling like it. His smile is the first thing we look forward to every morning. There’s also the surprising side effect, that you become extra productive and efficient because you know that you have a small window of time (in-between baby’s naps) to get a lot of things done!

Is it already obvious who he looks like more - you or Misho?

Did you have any bothering weight problems after pregnancy? How did you manage that?

I was very careful not to gain unnecessary weight while I was pregnant so I didn’t have too much to lose, but those last 5 pounds were harder than usual to get rid of… it didn’t help that the gyms were closed due to the quarantine.

Under the current circumstances, we all have to spend a lot of time at home, and did this help you to understand and discover some characteristics in you and Misho, both as parents and as a couple, which you didn’t have time to see and discover before?

It’s not unusual for us to spend a lot of time together, so probably not… We’re both very adventurous so it’s been unusual to be limited with traveling and activities, but we make the best out of every situation – consequently, we’ve transformed our home into a club, movie theater, gym, and whatever else the mood calls for. We also take a lot of road trips.

How do you spend your time with your baby? Is it easy to take care of him? Who helps you?

Mish and I take care of him together, and sometimes we take turns to give each other time to work on our projects… We also get a lot of help from family which is such a gift because we get to keep our date nights.

Did you have the time or opportunity to work these days?

I haven’t been working much, because of the lockdown. I’m hoping we’ll get to work more soon..

What about HyeBrand? Will you continue shooting the show?

Yes, we recently released the full episode with Serj Tankian – the concept of the show is to speak to prominent figures, who have put Armenia in the headlines internationally and have had influence on branding the country, so that we can learn from them how better to get Armenia’s message out, how to attract tourism, how to attract investment, etc. So, Serj was an ideal guest considering he and System of a Down have educated people all over the world about Armenia and the Armenian cause. We will continue shooting HyeBrand for as long as we feel we continue to have guests with information and knowledge worth sharing.

And as you have mentioned in one of your Instagram posts - when you were 14, you couldn’t have imagined you would interview Serj Tankian one day. You’re now also good friends with him. How did you get to know each other, what memories do you have from your first meeting?

I believe my dad first met Serj at an Armenian Music Awards show in Los Angeles when I was 14 years old, and then introduced me because I was a huge fan. After that we all kind of knew each other as acquaintances and ran into each other from time to time, but we didn’t really become friends until a couple of years ago when we hung out with Serj and his wife Angela in Armenia.

Angela’s mom, Lena (our close family friend) knew my dad was in Armenia creating the magical little town of Voskevaz Winery – she contacted me and said Serj and Ang really want to come see it. We ended up having such a fun day together, drinking wine, admiring the art, sharing lots of laughs in our motherland… and we’ve all become great friends since.

As a journalist, what do you think - is it easier to interview your friends or the guests you are not close with?

I don’t consider myself a journalist, since I got my university degree in Sociology and work as a Television Producer/Host – I approach the work that I do from the viewpoint of a curious person who likes to have interesting conversations with accomplished individuals and to share these conversations with everyone else, so that it becomes a source of education, inspiration, and just something positive…

I try to break the formality of the shoot from the very beginning, whether or not the guest is a friend, so that we can have an actual interesting conversation verses a question/answer interview.

Being friends with the guest can be an advantage for several reasons – I might know special aspects of a friend’s character that I want the audience to experience, I can reference interesting conversations or experiences we’ve had off-camera that a stranger to the guest might not be aware of; Also, if we are friends, the guest probably feels more comfortable discussing difficult topics with me because they know they’re in a safe-zone.

This can also serve as a disadvantage because I find certain topics important to discuss which I know could be uncomfortable for the guest. For me the best way around this has been to ask all of the questions that I want to ask, but to let my guests know up front that if any question makes them uncomfortable or if they prefer not to answer, no problem, I will edit that part out – so far, none of my guests have wanted anything removed and we’ve touched on some really difficult topics including the Armenian Genocide with Larry King, which resulted in him getting death threats. Larry is a great example, actually, of the advantage in knowing the guest prior to the interview - had I not spent so much time chatting with him about all kinds of issues when we had traveled to New York for work, I wouldn’t have discovered that he had a really personal experience in regards to Armenia. He had so much interesting knowledge and unique experiences to share, especially pertaining to his friendship with the late Kirk Krekorian, and we wouldn’t have known him from this perspective with his other interviews.

Sona, I was looking through your Instagram profile and there were some questions about when you will be returning on screen. And I’ve noticed a lot of TV personalities are organizing live streams through Instagram or YouTube and doing some live projects. Do you have any ideas connected with live streams?

Yes, I really appreciate the continued support and would love to connect more, but going Live with a 5 month old isn’t so easy for me. I might do a couple, but it won’t be a consistent thing… I’m looking forward to our shoots where we visit the work-spaces of our guests because I think it’s so much more engaging when I get to take the audience with me to step into the worlds of our guests and be exposed to a day in the life of each guest…

Is there any person who needs to approve your interviews before you publish them? Whose opinion is the most important for you?

No one has to approve once we’ve already shot the interviews, but before I take on projects, I consult with my manager. My own opinion is actually most important for me because I have to feel like there’s something special and different in what I’ve done. And after that I always consult with Mish and my parents because they’re all artists, they’re all the most creative and smartest people I know, so their opinion matters to me. And then after that, I don’t really care what anyone else thinks because when I’m certain and confident about my direction, that’s all I need. If public opinion mattered to me, I would create a pop project and not something with such a distinct direction and audience.

The coverage of Covid-19 shows that a lot of journalists still try to make their articles even more sensational by putting on them more scandalous titles... and this also leads the public to panic even more, affecting their health and emotions! What are, according to you, the main features of the good and responsible journalist?

I think to be truthful, unbiased, and fact-based are the most important features of a good journalist. I was listening to an interview with one of my favorite journalists recently who was saying he’s experiencing so much pressure to fit into one extreme narrative or another, and that anything in-between, a grey area per say, would prevent his story from appearing on the major networks. I think that’s a deeply concerning issue, and people have to at least be conscious of the politics and the business that goes into reporting nowadays. I think we also need to check a variety of sources, including ones we don’t often agree with, just to be mindful of how differently each topic is being reported on and to consider all sides carefully.