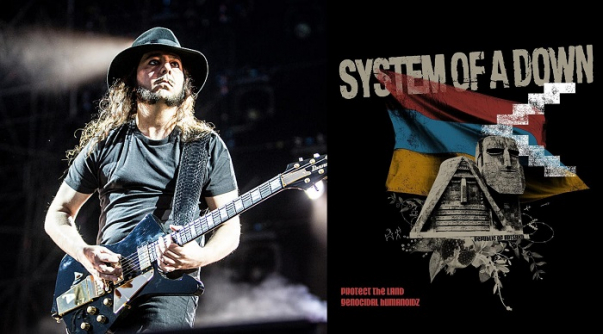 System Of A Down star Daron Malakian told Guitar World how the SOAD had recorded their 1st new music in 15 years.

"I don’t have all the details, but we were kinda forced into some kind of agreement that means we’re giving up land," SOAD’s guitarist noted. "It’s such a bad situation now – there are 100,000 to 150,000 people that will be displaced and become refugees. Things have gotten even worse over the last couple of days…

"We’ve tried to raise awareness because there is a human catastrophe going on in the world right now and people aren’t paying attention. Some people don’t even know where Armenia is! So of course they’re not going to pay attention to some country they haven’t even heard of."

"We’re lucky enough to be in a band that can spread the message for our people this way. I’m not sure how much we’ve helped the situation judging by the last couple of days, but there’s a lot of people who now know about what’s happening that probably wouldn’t have otherwise."

Asked whether the ban will present new music in the near future, the musician said: "Look, I never say never. We didn’t even know this was going to happen. I was on my way to releasing these songs with my other band Scars On Broadway. Then the situation in Armenia happened and put our differences aside. And our differences are only within the band."