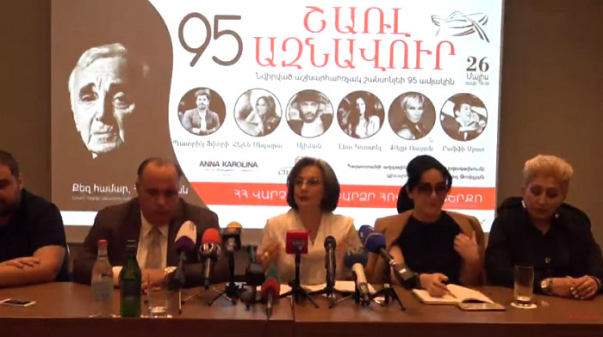 Despite organizational issues, the concert dedicated to the 95th anniversary of Charles Aznavour (scheduled to be held at Karen Demirtchyan Sport and Concert Complex in Yerevan) will be held on May 26.

This is what Acting Minister of Culture of Armenia Nazeli Gharibyan said during a May 21 press conference, adding that even though she wasn’t supposed to talk about the concert today since the organizer is another company, she had to fix the flaws in regard to the concert dedicated to Aznavour. “Yesterday, I received an alarm that the concert couldn’t take place since there are problems that, I believe, are the result of poor management and wrong agreements. I had to interfere and invite both parties. After nearly two-and-a-half hours of negotiations, we managed to reach a point where we announced today that the concert will be held. It will be held because, first, it is dedicated to the 95th anniversary of Aznavour, and second, it will be held under the high patronage of the Prime Minister, which is also binding.”

Gharibyan took advantage of the opportunity and mentioned the big flaw in the cultural field in Armenia, especially in terms of organizing concerts and licensing.

The performances by international artists in Yerevan is the initiative of France-based Hayk Shahbazyan and Ana Carolina, who received the offer for collaboration in December. “We requested the permission for copyright, had 3-4 contracts and signed an agreement. It seemed as though everything was going well. In April, we came to Armenia and met with the organizers and faced a big problem since there were financial problems and technical difficulties. By law, we could have annulled the contract, but since the concert was dedicated to the 95th anniversary of the great singer, we tried to do everything we could to make sure the concert was held.

We addressed the government, namely the Ministry of Culture, and fortunately, the issue was solved in a short period of time,” Ana Carolina stated, adding that the Information Center organization was dealing with the organizing of the concert. She also assured that all the artists — Patrick Fiori, Helene Segara, Slimane, Lea Castel and Kate Ryan — will perform during the concert.

Director of the Karen Demirtchyan Sport and Concert Complex Karen Ghazaryan stressed that it is necessary to forget the problems and attend the concert to celebrate the great singer’s 95th anniversary. “No organization has done anything bad. It’s just that there are gaps in the organizing of concerts. There can be problems with any concert in the future, if we don’t fix the flaws,” he stated.