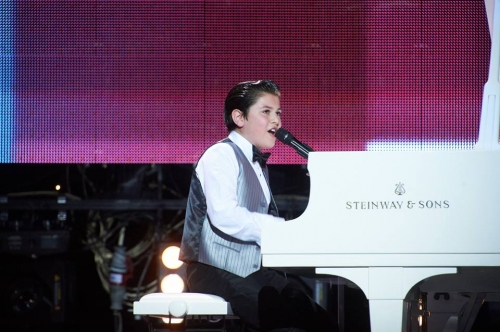 The Eurovision 2014 Song Contest Grand Final will take place on Saturday in the Danish capital city of Copenhagen. And famous Armenian showman, comedian, and singer Aram MP3 (Aram Sargsyan), who represents Armenia at the event, and with his song “Not Alone,” will perform in seventh place at the event.

The Grand Final will kick off at 11pm Armenia time, and it will broadcast live on Public Television of Armenia. Twelve-year-old French-Armenian musical prodigy Raffi Arto roots for and wishes success to Armenia’s contestant.

“Dear Aram, in the first phase [of the song contest], we already voted for you like crazy by spending all the accounts of the [mobile] phones of mine, my parents, relatives, and friends. Even my friends of different nationalities and faith voted for you, since they were convinced of your talent.

“I sincerely wish you victory [at the contest], since only you deserve it. We—me, my parents, and all of my friends—will spend all our phone money on sending SMS for you. “You are not alone,” the young musician said in an interview with NEWS.am STYLE.